Meet the Jernigans. If you told Lacy and Scott Jernigan a year ago that they would be foster parents with an 18-year-old young woman living with them and their twin toddlers, they probably wouldn’t know what to think.

It all started when Lacey realized that something was not quite right with one of the young women in the small group she led at Browns Bridge Church. She knew action needed to be taken, which meant reporting some things about Morgan’s current living situation. This resulted in Morgan’s removal from her home.

Despite several attempts at finding a new home for Morgan, she was eventually placed in a group home and God started to nudge Lacey and Scott’s hearts. 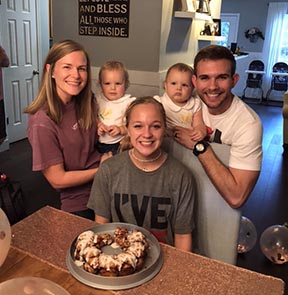 “I was having dreams about taking her in,” says Lacey. “I felt like God wanted us to be involved in her life, but we didn’t know what that meant.”

Scott and Lacey got permission from the state to bring her to and from church so that she could keep some of the connections she had made there. Eventually they both knew what to do.

“I soon knew that I wanted to call her my own, but I was afraid to tell my husband that I felt like God wanted us to take her in.” says Lacey. “I prayed, ‘God if this is what you really want for her, you are going to have to tell Scott yourself.’ How could I ask my husband to take in a teenage girl when our twin daughters had just turned one?”

Within a week Scott approached Lacey and said “OK. What do we need to do to keep her?”

“I lost it,” Lacey said, “I knew what God had already placed in my heart and He clearly placed it in my husband’s heart too.”

There was only one barrier. They needed to become licensed foster parents – a process that often takes the better part of 6 months.

Working together, they expedited the training and home study process so that the Jernigans were approved within two months, despite significant barriers, including a major flood in their home.

It took another three months, but on December 1 they finally brought Morgan home. Their Community of Care supported them in countless ways, including mentoring Morgan and a bedroom renovation project by their small group.

Being foster parents was never something they thought of, according to Lacey. “We te 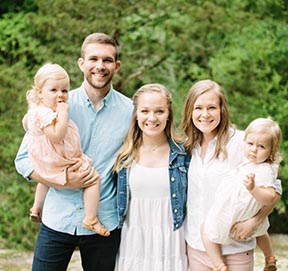 nd to think of the foster parents we know as superheroes and we could never live up to that.”

They have since learned that it has nothing to do with having any special talent, just faith in God.

“None of this has been easy by any means,” said Lacey, “but we have never felt more purpose in anything we have done. All it takes is to be obedient to that one next step God calls you to, and He will take care of the details and carry you through.”

Summer 2021 Update: The Jernigans adopted Morgan in June 2020, just after welcoming a new baby sister into the family. Morgan is preparing for her Junior year at Mercer University and enjoys coming home to a full house on breaks and holidays.